We frequently hear the term “servant leader” used to describe an ideally “enlightened” manager or executive. People who instinctively welcome the idea of servant leadership often see it as a sort of inverted management pyramid, with executives supporting the rest of the organization. Those who don’t may envision an overly idealistic or even paternalistic leader who is ineffectual and not grounded in the hard realities of running a business.

The term was coined by Robert Greenleaf in his 1970 essay The Servant Leader. Greenleaf worked at AT&T for almost 40 years starting in 1926, and was their director of management development. 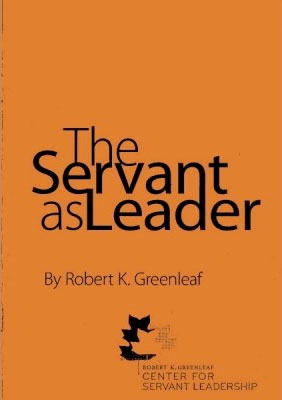 As a corporate businessman, his personal mission was to influence and improve the way large institutions serve both the individuals who work for them and society at large. His main idea was fundamentally this: “The organization exists for the person as much as the person exists for the organization.” He retired in 1964 to form a nonprofit, The Center for Applied Ethics (now the Greenleaf Center).

According to the Greenleaf Center, servant leadership is “a philosophy and set of practices that enriches the lives of individuals, builds better organizations and ultimately creates a more just and caring world.” As Greenleaf wrote in his essay,

It begins with the natural feeling that one wants to serve, to serve first. Then conscious choice brings one to aspire to lead. That person is sharply different from one who is leader first…. The difference manifests itself in the care taken by the servant-first to make sure that other people’s highest priority needs are being served. The best test, and difficult to administer, is: Do those served grow as persons?

Rather than hoarding and concentrating power, the servant-leader works to share power, and to help others develop and perform to their potential.

The concept of servant leadership in lean management

To learn how two expert lean leaders interpret servant leadership, we spoke with David Mann, author of Creating a Lean Culture: Tools to Sustain Lean Conversions, who has observed, researched, worked with, and counseled lean managers for many years, and Mark Schilling, who has “walked the talk” as a lean leader in different companies over 20-plus years.

“I often use the term servant leader to describe how I see leaders when they fully develop and are at their most effective,” said Mark Schilling, general manager at New Breed Logistics, a company that builds intelligent supply chain solutions for its clients. “The primary job of a leader is to create a situation where others can be successful; when others are successful, the leader is successful. The work of a leader then begins to be that of looking every day for opportunities to engage where people are counting on them to be more successful.”

“It’s a different slant and approach,” Schilling continued. “Many leaders wouldn’t subscribe to the idea that their role is to serve first. I think every manager or leader wants to win and wants to be successful; most are competitive people. Many times they’ll take the approach that ‘it’s all up to me and I’ve got to provide all the direction, tools, targets, and answers so that others know what to do to make the site successful.’ As a servant leader I do have to be able to provide the vision, goals, and objectives. But then I need to jump back quickly and help teach, coach, and provide resources. That’s where I would call myself a servant.”

Can you do what we’re asking?

David Mann has focused for years on developing, applying, and operationalizing lean management systems—first at furniture-maker Steelcase Inc., and then in his own work teaching, coaching, and helping organizations with lean transformations. He doesn’t use the term servant leader, but does hear it used sometimes in a lean context. Here is his translation of what that means:

Starting with the basic level of a direct supervisor, it has to do with making sure that people know what they’re supposed to do, that they know how to do what they’re supposed to do, and that they have what they need to do their work—the appropriate information, tools, and materials, and equipment that’s operating effectively. When they have problems, they also need to have access to someone who will listen to them, and will take action to help resolve those problems when they interrupt or frustrate them in doing the work they’re supposed to do. As a rule of thumb, an effective supervisor also knows something about every person they work with, talks with every person every day, and expresses some level of personal interest in them. That all goes to the issue of trust: ‘Do you know me, do you care about me, and can I trust you?

As you move up the organization to managerial or executive levels, Mann says those dimensions don’t change a lot, but how they get operationalized does. “As an executive, I probably won’t know in detail what an employee actually does in terms of techniques, skills, or specific tasks. But reversing it for a minute, if a servant leader wants an employee to serve the organization’s strategy, then he or she does need to have a handle on some of the same issues as a direct supervisor. That is, are you able to do what we’re asking you to do (at this level, what we’re asking is much broader), is the work understandable, and are you prepared and able to do it without interruption, frustration, and delay, or are you having problems?”

Simply exhorting people to be better leaders, or lean leaders, or servant leaders is not helpful. You’ve got to set clear expectations for behaviors, and translate broad concepts into practices and tools. Only then will people understand what they’re supposed to be doing, and, as Mann pointed out, without those operational nuts and bolts, you don’t have a leadership proposition that can be tested and verified as effective.

So what do servant leaders do, in a lean environment? Schilling expressed it this way: “When I go to work, my goal is to figure out how I help serve this team today so that they have everything they need to be successful. That means I align resources, knock down roadblocks, help communicate, provide materials and tools, whatever it might be. Sometimes it takes a kick in the pants. Maybe my job today to best serve my plant manager is to provide a good strong critique. That’s fine; it’s part of being a servant leader. I think those that criticize servant leadership get caught up in thinking, Well, that just means a nice guy who never speaks a harsh word, and that couldn’t be further from the truth.”

Developing those around you also means letting go of the notion that you are the one who needs to have all the answers. “A typical manager might walk in and look at a set of metrics every day, decide where gaps are, and work to close them,” Schilling said. “That might include developing an action plan, meeting with a second-level manager, and saying, ‘Here are the things that need to be done, here’s where the gaps are, go do this today, and I’ll check back with you later.’ A servant leader might address the same situation by asking more questions to find out what the second-level manager has in mind and offer methods to make it more effective. There may be give-and-take and critiques about ideas that have been tried in the past and haven’t worked, aimed at learning from our mistakes. But the initial approach is ‘I’ve got to help this person be successful today,’ rather than ‘I have to make this metric better today.’”

For Mann, making this style of leadership operational means having a lean management system in place that everyone actually uses. “You should be able to say, I’ve got a problem ID and response process, and I devote some resources to it (it doesn’t take very many). I’ve made some Investment in problem-solving skills with the people who do the work, and I’m also giving people a vehicle to tell us where we could make things better, based on what they know about the process. There are capital-resource intensive improvements, like better technology, but there are also improvement opportunities that are extremely valuable but completely below the radar of people in leadership positions.” A key leadership practice for monitoring, managing, and sustaining the lean management system is the gemba walk, as Mann discusses in his book. (For a quick introduction to the practice, see Productivity’s Gemba Walk Overview.)

The benefits of developing people

If the point of servant leadership is to develop the people who work for you and with you, what are the bottom-line benefits to the organization?

If the point of servant leadership is to develop the people who work for you and with you, what are the bottom-line benefits to the organization? “In short,” Schilling said, “servant leadership is about developing people to lead in a more effective way knowing the parameters, knowing the tools and resources they have in place and making decisions on their own versus waiting for direction. The benefit over time is that those who are around a servant leader and develop servant leader skills can begin to take on additional tasks because they feel more empowered and able to make decisions (with guidance so that they don’t get out of bounds) and can manage their own areas. It fosters the idea of selfdirected work teams.”

It also builds trust, as both Mann and Schilling emphasized. As Schilling put it, “Just being able to walk in every day and say ‘I know my boss is here to help me if I get in a bind or if I don’t know the answer; I know that he or she is on my side, even if it means critiquing what I’m doing,’ fosters a completely different attitude, versus ‘I wonder what I’m going to find today; I know there’s going to be a gap but what’s going to be the input?’ I think it clearly affects motivation.”

According to Mann, “most people come to work wanting to do a good job – they bring motivation with them most of the time. You don’t create motivation in people; rather, to have people who appear to be more motivated it’s an organization’s responsibility to remove the barriers it has imposed—almost always unintentionally—to people’s ability to express their motivation and to do a better job.”

“Shingo said that lean is initially not about eliminating waste but about finding it,” Mann pointed out. “When we give people a vehicle for describing the problems that they encounter and suggesting and participating in improvements, it doesn’t mean we’re turning the organizational hierarchy upside down in terms of strategy. But listening to employees is a sign that the organization respects their abilities to operate their parts of the process, and that it respects their motivation to make the process better.”

Q. How can I improve the effectiveness of my lean initiatives?

A. There are many factors that need to come together simultaneously to deploy and sustain an effective lean enterprise transformation. Three nuggets that are particularly helpful to consider are these:

The unimpeachable problem statement points directly to the art of concise communication.

"Team chartering" (often referred to as "project chartering")– what it is, why it is important and the elements that go into a great charter.