A Journey to World Class

Samlesbury is one of the largest breweries in Britain, and has the capacity in its fermentation and maturation vessels to supply a pint of beer to every UK resident.

As a 30 year old site in an increasingly competitive industry, cost reduction through improved asset utilisation was seen as a major issue for the future, and the vehicle for driving this was employee involvement through application of total productive maintenance (TPM) principles.

However, Samlesbury had previously tried TPM and failed. One anecdote told of an autonomous maintenance exercise which had resulted in a major item of equipment being covered with tags which were later just painted over.

This time, the company would take a more pragmatic approach, aimed mainly at involving shift teams in improvements in hygiene and workplace organisation, tapping into the workforce’s unused expertise. Benchmarking visits to look at employee involvement confirmed that 5S principles were a very powerful way to involve people, but management were concerned not to brand the initiative, but to develop their own approach.

A process improvement manager, Mark Holmes, was appointed to initiate and run the program, which became known as simply Asset Care (a banner that could include almost any activity). As a pilot, the company chose the older bottling line 4 rather than the new high-profile line 3. The advantage of this was that line 4’s equipment had deteriorated significantly, but also that the line was not on any high-profile walkways – it was somewhere the company could safely experiment.

External trainers from Productivity Europe, whom general manager Richard Jenner had also used while working at Unilever, were used to deliver the initial training, which comprised a ‘down day’ when two shifts were brought in together, given an overview of the approach and then audited their assigned area and developed an improvement plan. The approach was based on 5S principles, but using 5S for improvement, not just housekeeping.

This meant that the teams, as well as conducting 5S audits, produced a 30- problem list of issues which were then prioritized and categorized as ‘do’s’ (improvements the teams could make immediately), ‘fixes’ (those that required some small resource or time slot planning) or ‘redesigns’ (those that required longer term project work). Teams were encouraged to look for low-cost, low-tech, people-friendly improvements that resulted in a very large proportion of do’s and fixes rather than redesign projects. At the end of the implementation day the teams presented their findings and plans to management with their prototype activity board. 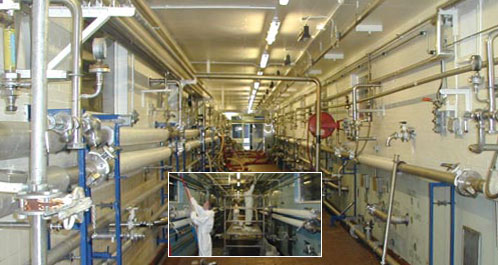 The major learning from the pilot was that although a classical seven-step autonomous maintenance program had initially been considered, it was more effective in this environment to start with 5S in the area and then apply 5S to equipment using the 30-problem list and action planning system they had developed. Other TPM techniques, such as measuring OEE (overall equipment effectiveness) and developing operator maintenance standards were simply brought in as part of the Asset Care process. Bill Thomas and Steve White were appointed as internal Asset Care coordinators; they still use the 5S image of the shed and the supermarket – are we working in a dirty, disorganized shed or a clean, visually managed supermarket?

Communication across shifts remained a difficulty – each shift was responsible for setting the standard and making improvements for a specific area, but all shifts then needed to work to the standard. This necessitated a lot of work on visual management and control. In order to generate ownership, activity boards were not totally standardized but were created by each team, within Asset Care guidelines and principles. Each team nominated an Asset Care facilitator, who took responsibility for managing the 5S activities alongside the team leader. Supernumerary operators were also provided on day shift to free people up for improvement work.

The line 4 pilot was launched in September 2000. By January 2001 the company had enough confidence in the process to launch in other areas. In 2001 line 4 rose to within one per cent of the efficiency of the much newer line 3, a notable achievement, which has secured investment in new secondary packaging equipment this year.

Asset Care has transformed Racking into a shining example of employee involvement. Using 5S principles the area has improved its housekeeping audit scores from the 20s to the 70s and has increased efficiency from 57 to 62 per cent. The plant has hit 70 per cent on some shifts, a level which racking manager Paul Brow believes is sustainable; only an inability to get enough kegs loaded to the line stops it being achieved regularly. The teams have a focused improvement war room to look at particular issues, such as raising the efficiency of the ‘core’ plant.

This progression from 5S to focused improvement is a deliberate strategy, and Mark Holmes believes the sequence is important. 5S is aimed at increasing involvement and allowing teams to do away with their ‘gripes’, many of which do affect performance. Focused improvement then looks at specific issues using traditional problem-solving tools such as cause and effect diagrams.

Beer Recovery is a good example of this. An initial 5S audit of the Beer Recovery area recorded a score of 7 and generated 40 do’s, 5 fixes and 3 redesigns. Four weeks later the audit score was 21, and improvements were well under way. Management responded to this by authorizing a focused improvement project on the alcohol recovery plant, which had been identified as a constraint on the brewing process, in parallel with the 5S work.

Using a cause and effect diagram, the teams identified three areas of focus – methods (understanding of the process), the process itself, and plant reliability.To tackle the methods issue, new written standards were developed by the teams and everyone trained in the correct operating procedure. In terms of the process itself, it was again traced to a lack of standardization of yeast dilution and so standards for the operation were developed by the team to counter this. Plant reliability was then tackled through the Asset Care process, raising 22 improvements on the alcohol recovery plant alone.

Over the four-month project, the workplace audit score was raised to 55 per cent and 86 improvements were implemented. The focused improvement project itself resulted in a cost saving of nearly £90,000.

Mark Holmes believes they are 30 per cent of the way to being world class, with the process consolidated in some areas.The challenge now is to ensure that all areas are developed to the same standard and the site focus is on the issues that improve performance. Two points Mark makes are that teams will always want to move faster than your ability to support them, so managing expectations is important; and that the best ideas are low cost – the company has spent money on asset care improvements, but that money has gone a long way.

For: Hospital Nursing Unit Situational Challenge Increases in supply costs had raised awareness of how hospital supplies are distributed, inventoried, […]

As with many companies, the challenges facing United Seating & Mobility include increasing expectations of quality products and services, pressure from customers to reduce prices, and competition from numerous competitors in an industry suffering through consolidation. But by committing itself to becoming lean, United Seating – which produces customized wheelchairs, scooters and other mobility products – is not only surviving, but expanding as other companies fall by the wayside.