The goal of Maintenance Improvement is to move away from reactive to a proactive or planned maintenance process. As part of this process, maintenance personnel analyze breakdowns to reveal equipment weaknesses and then modify equipment to improve its operation, maintainability and lengthen equipment life 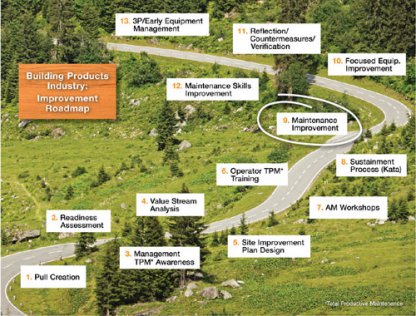 A leading manufacturer of vinyl siding delivers the Poly Vinyl Chloride (PVC) in powder form to the extruding lines via a vacuum system with remote blowers creating the vacuum needed to move the materials. The failure of two separate blowers back-to-back within hours on the same delivery system highlighted the problem of a reactive maintenance process and led to the realization that the maintenance organization did not possess the skills necessary to conduct a full analysis to determine root cause.

Root Cause Machine Failure Analysis was introduced to the maintenance reliability team. The maintenance team, guided by their Productivity consultant used Productivity’s 8 Step ‘Machine Failure Analysis’ process to identify the root cause of the failure. The team first identified the true physical nature of the failure by performing a physical analysis of the blowers and the entire vacuum system, including all piping, wiring, electronics and mechanical systems.

Constituent conditions and casual factors were identified that could have caused or possibly contributed to the failure. These factors were also analyzed and discussed using the problem solving tools of CEDAC (fishbone diagram with the addition of cards) and opportunity radar. Action items were set and completed to eliminate ALL conditions and factors that could have possibly led to the failure.

It was found that a combination of several constituent conditions and casual factors were at the root cause of the failure, none of them being the actual blower. A fill sensor on the production line hopper was not functioning properly causing the signal to the vacuum system to constantly call for material, causing the blower to constantly run. Additionally, the muffler on the blower system was constrained not allowing the blower to properly breathe. And finally, the pop-off valve which releases when a high Hg is present was corroded and non-functional. All three of these factors in concert led to the overheating and eventual failure of both blowers.

An action plan was written to address potential failure of all similar conditions across other production lines and vacuum systems. The internal reliability team is now trained on the practice of Machine Failure Analysis and can now apply the process when needed.

The 8 Steps of Failure Analysis:

Reactive maintenance practices within the facility resulted in unplanned downtime which led to production disruptions and lost yield.

The maintenance reliability team has reviewed all documentation of the system and is now greater prepared to troubleshoot the systems in the future. Production lines will see increased run-time due to reduced unplanned downtime from this particular failure. Application of the Machine Failure Analysis process can now be employed immediately in-house reducing further unplanned downtime.

A Journey to World Class

The Samlesbury brewery, now owned by Interbrew, has used its Asset Care programme as a key tool for pursuing cost reduction through more intensive use of plant