Innovation is what we need to drive growth, but what defines it? It can mean the pursuit of just about anything new. If you want to innovate as a company, you need a grasp of what it means to you. Otherwise, you risk having your strategic growth efforts become dissolute and unproductive.

Here’s our working definition of innovation: it’s an enterprise-wide capability to conceptualize, develop, and deliver to market new value. The means to finding that new value equation depends on your industry, company situation, and competitive environment. But one thing common to most innovation initiatives is this: New value is generated by adapting and combining concepts that have already been successfully demonstrated in other domains. It’s not invention; it’s enlightened adaptation.

One company that has combined existing concepts into a blockbuster offering is Tencent, a Chinese internet company. Last decade, it had become well-known for its widely used, PC-based QQ messaging service.

Despite its strong position, the company was acutely aware that shifts in technology and plays made by industry upstarts can quickly demolish existing value propositions, and take down organizations that aren’t adapting. So in 2010, it deliberately set itself to the task of developing a new kind of messaging tool. The result was a new offering called Weixin (literally “micro message,” known in English as WeChat), a mobile messaging, sharing, and networking application, and the story of its success is enlightening.

Since its launch in January, 2011, Weixin has been adopted by 300 million users. That is forecast to grow to 400 million users and $500 million revenue in 2014. The free service combines Facebook-like features with elements of Instagram (a photo-sharing application), and a hold-to-talk voice messaging feature. As an alternative to typing messages, Weixin users can record and send a voice note at the push of a button, in a modified “walkie-talkie” style. 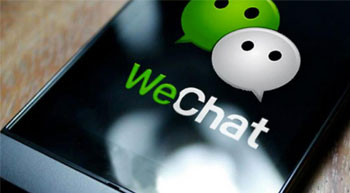 All the elements of the Weixin application already existed, but the Tencent developers combined them in a way that has proven to be a winner with customers, and that leveraged their existing QQ user base of more than 700 million. As one 29-year-old user put it, “This is how we communicate.” It’s overtaken other staterun communication services, and the company is poised for further industry disruption. For example, while the revenue they currently generate comes mostly from mobile games, they’ve got plans for more applications that include everything from easy booking of transportation and travel to interacting with things – as in controlling TVs and home appliances.

The “internet of things”

The notion of recombining existing information capabilities to interact with things rather than with people has huge potential to affect both services and products. The “internet of things”-devices that can sense the world around them and act on that information-is emerging around us. In the internet of things, data is produced and/or consumed by machines rather than by people.

Nest Technologies, a manufacturer of smart thermostats and smoke detectors, is one company that has capitalized on that concept. (See our news item from September 2012, “Big Data—It’s Everywhere.“)

Nest was recently acquired by Google, for $3.2 billion in cash. That’s a big deal, in more ways than one. In a recent interview Walter Isaacson, the author of the bestselling biography Steve Jobs, cited the move as a sign that Google has stolen the innovation crown from Apple. The deal exemplifies, he said, the “amazingly strong integrated strategy that Google has to connect all of our devices, all of our lives, from our car, to our navigation system, to how our garage doors are going to open.” Weixin seems to be thinking along similar lines, if on a somewhat smaller scale.
Using data capabilities as a source of innovation”

Recent research reported in Harvard Business Review suggests a new way of framing growth opportunities by asking the question, “How can we create value for customers using data and analytic tools we own or could have access to?” The authors describe five patterns that emerge when we look at how companies develop new value by drawing on data. They tend to:

The infrastructure side of your business model map

In the parlance of the business model map, framing data- and analysis-based growth and innovation opportunities means examining the infrastructure side of the map, to see what data assets and analysis capabilities might be repurposed and expanded to create new value.

While innovation initiatives often focus on the voice of the customer, by identifying unmet customer needs through in-depth research, ethnography, and so on, they can also rely on listening to the voice of your products and processes. One way to hear that voice is to pay attention to your entire business model map.

As the authors of the HBR article put it, the key questions to ask are, “What data…”

You may just find the seeds of spin-off products and services that could extend your existing value propositions, or create brand-new ones that require new business models.

” Innovation does not necessarily rely on inventing new technologies, but on the way we combine and apply existing capabilities.”

” Don’t ignore the infrastructure side of your business model map. While any new value proposition naturally needs to resonate with customer needs, your infrastructure assets and capabilities can help frame potential growth initiatives.”

” Dig into your existing data capabilities. How could they be extracted, extended, or recombined with other data and applied to create new value for your company, your customers, or other companies?”

Decentralization: The Future “What” and “How”

The decentralization of manufacturing, of services, and of innovation processes is happening or at least on the horizon all around us, with great potential to disrupt major industries. It’s a revolution powered by digital technology.

Although middle market companies – those with revenues between $10 million and $1 billion – make up only about 3% of American businesses, this segment is a huge economic force, accounting for roughly a third of the U.S. GDP and more than 43 million jobs. That's according to the National Center for the Middle Market.*