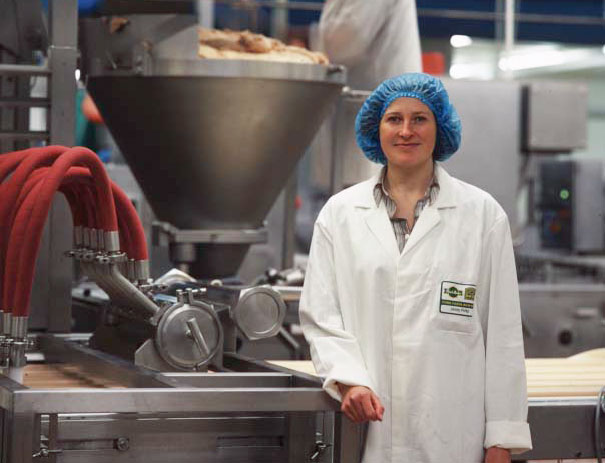 Shopfloor organization is fundamentally important to a food manufacturer. It helps to fuel tidiness, which in turn can assist with achieving the necessary levels of cleanliness – particularly important among suppliers to the UK’s leading supermarket chains.

At the Nottingham factory of Pork Farms Bowyers (PFB), the lack of organization in the production department was of major concern.Accidents were also occurring with some degree of frequency.The company was convinced the two problems were related, and that the 5S technique could help to overcome both. Alongside this, with customer audits common place, PFB didn’t want to give any of its prestigious customers grounds for taking business elsewhere.

In the last two years the company has made giant steps towards radically overhauling its workplace organization. One of the pioneers of the idea to transform PFB is manufacturing facilitator Jenny Perks. A change of role within the organization, along with a three-day workshop presented by Productivity Europe at a nearby company in November 2000, convinced her, along with the company’s new general manager, that there would be a lot to be said for deploying 5S at PFB. “We knew it would be hard to build without the use of 5S as a starting point and a foundation,” she says.

After the workshop, Perks set about creating a promotional plan, aimed at informing everyone at PFB, from senior management to shopfloor operators, about the plans for 5S. In April 200, Productivity Europe consultant Paul Quayle presented his first of five two day 5S workshops at PFB.Attendance was voluntary. “I was fairly confident they would succeed as soon as I saw who turned up for the first workshop,” he says.“This is always a good indicator that a company is prepared to support the initiative with resource.”

“The production area has been totally transformed, it is such a better area in which to work now – and our accident rate has decreased significantly” Jenny Perks, Manufacturing Facilitator, Pork Farms Bowyers

A steering committee was formulated consisting of managers from accounts, hygiene and quality, manufacturing, engineering, training and also a senior shop steward (the union has been “really positive”).The Productivity Europe workshops finished in January 2002 and encompassed 20 per cent of employees.The workshops encourage personnel to undertake internal audits, mapping out and identifying 30 problems.These are put into ‘serious, major, minor or trivial’ categories along with an indication of how difficult they are to fix. Serious problems that are relatively simple to correct then head the priority list.

In parallel with these courses,‘train the trainer’ sessions were also taking place. “This was the most powerful thing from our point of view,” adds Perks,“as it allowed us to present a further 11 workshops in 2002 and we set supervisors the target of getting 50 per cent of staff trained and, as an average across the site, this was achieved. We hope this will be 80 per cent by the end of 2003.”

Early on in the process PFB decided that the 5S program needed a title that would avoid any jargon. After some thought, STEPS was created – Sort, Tidy, Examine, Perfect and Sustain. In brief, the ‘sort’ step involves the removal of unwanted items.‘Tidy’ gets people to find a home for the remaining items that are deemed of use, while ‘examine’ is a daily routine ensuring that what is already in place has remained so.“In a way it’s a form of discipline,” clarifies Perks.“This has been a big mindset shift for us and it has taken time to instill that getting organized is one thing, but looking after an area is also important. For this reason we created a new in house logo,‘pride in our factory – pride in our brand.’”

The fourth step, ‘perfect’ is a way of standardizing, so that instructions are clear. “This step allows us to determine whether everyone is doing it the same way. We want to get away from operators having a little book of settings in their back pocket. ”‘Sustain’ is the final step and is a method of maintaining the progress that has been made. It is also subject to scrutiny at regular PFB performance reviews. 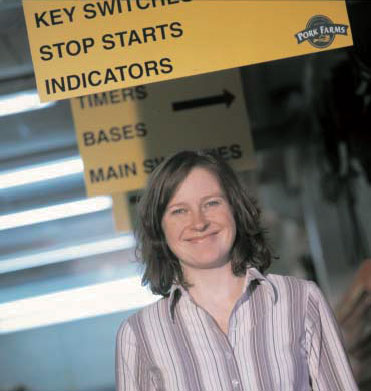 The ball hasn’t stopped rolling. The company is part of the Northern Foods group; there has been a lot of credence from within the group regarding PFB’s efforts.“It’s difficult to say exactly how much STEPS has achieved in terms of cost savings,” says Perks.“Everything has been simplified and all items have a home, but how much does that equate to in time saved not looking for things? In visual terms the whole production area has been totally transformed, it is such a better area in which to work now – and our accident rate has decreased significantly.”

Quayle agrees that it is tricky to attribute direct gains to a program based purely on organization. “The areas are more efficient,” he says.“You can see the improvement in the way that things are marked out and identified. It is difficult to attribute savings directly to STEPS but if a workplace is organized there will be benefits. Once an area is sorted, operators become more critical – they don’t accept waste. For instance, if someone works in an untidy area they don’t worry about throwing something down. Environment affects behavior – once something like STEPS is started it gains its own momentum. It breaks down barriers and people begin to work together better.”

Were there any dissenters at PFB? “Yes, there is always a small minority,” admits Quayle, “So we work with the ones that do want to take part and slowly but surely the small group at the back gets smaller. Initial fear plays a part, some people will naturally be unsure of what it is all about and see it as more work.This remains until they begin to understand it.

That the workforce has bought into the ethic of STEPS so readily is testament both to them and to management. PFB has employed several reward techniques to bolster participation.There is a league table of audit scores, with a trophy for the highest placed team at specified intervals and a free meal for the team that makes the biggest leap in score, as well as a special STEPS ‘star’ award for the best performing individual, who wins a distinguished T-shirt and voucher. A training matrix on company noticeboards helps to promote the reward and recognition ethos.

PFB is now looking at other techniques.“As a group, Northern Foods has a shared vision for Lean manufacturing and our site is being hailed as the factory to visit to see how to get the foundations in place,” says Perks. Autonomous maintenance is also being looked at in some detail:“We expect to be able to link it into our third step, but it will entail a much more detailed look at the actual kit. We feel we have created an environment where people want to get involved and we will be starting some of these new initiatives with the team that has appeared consistently at the top of our STEPS league table, as we basically think that they are ready for more.”

Paul Quayle believes PFB was right to undertake 5S before considering other improvement techniques. “Some companies want to take on Six Sigma without having done 5S, which is crazy in my opinion.Any company needs workshop organization first before it tackles anything else. PFB have had good support from the top that has committed the resource and they were determined to make it happen. 5S doesn’t require a lot in the way of finance but it does need time.”

The measurable for the success of STEPS at PFB is the aforementioned audit scores. After the initial series of workshops, scores were around 40 per cent. But improvement was fairly rapid and once teams achieved a score of at least 80 per cent for three consecutive months they were transferred on to a continuous improvement audit linked to attributes such as safety.The team currently at the top of PFB’s league table has a score of 93 per cent.

For the future, the firm has its eye on Cranfield School of Management’s annual Best Factory award. “We entered last year and we are entering again this year. I think we are two or three years away from being in a position to win and while it is also about building business behind the trophy, it is good for us to use as a benchmark.”

According to Perks, the results of STEPS are also being noticed outside the company. Notoriously hard-to please retail customers who conduct regular audits are said to be impressed. This is just reward for a company that has created both an organized, tidy and safe production department with open channels of communication, and a foundation to continue building to become one of the UK’s most acclaimed manufacturing sites. As for other improvements such as product quality, it would probably be best to ask the consumer – the proof, as they say at Pork Farms Bowyers, is in the pie.

For: 550-Bed Metropolitan Hospital Situational Challenge Surgical capacity in hospital facilities is limited by the number of Operating Rooms, regulatory […]