Names like Jeff Bezos (founder and CEO of Amazon) have become synonymous with disruptive innovation. What can we learn from leaders who, like Bezos, have not only achieved entrepreneurial breakthroughs but gone on to nurture them into big businesses that continue to innovate?

In recent interviews¹ Bezos and other innovation leaders discussed the nature of entrepreneurship. They raised key points that resonate with strategic innovation. Let’s take a closer look to see how the thinking and skills of two such entrepreneurs can help inform your strategy for innovation.

The vision for innovation

“[B]e stubborn on the vision but flexible on the details.”² – Jeff Bezos, Amazon CEO

An innovation strategy links ingenuity with your brand and your overall strategy for growth. It starts with a vision for the creation of new value. That vision serves as the compass heading and touchstone for your innovation strategy. But, as Bezos advises, successful entrepreneurs stay agile in order to sidestep obstacles and adjust to changes in internal and external business conditions. He says, “They’re persistent on what they’re trying to accomplish, but they are willing to rewrite the details as needed as they learn and as things fail.”²

This duality of remaining firm on the vision and flexible on the details is perhaps most clearly expressed in the mantra with which Bezos closes his most recent letter to shareholders (April 2014): “Our approach remains the same, and it’s still Day 1.” (That’s a refrain from his very first letter to shareholders, in which he states, “this is Day 1 for the Internet and, if we execute well, for Amazon.com.”)

The “Day 1” spirit translates into a slew of innovation principles and practices, some of which are also articulated in Bezos’ April 2014 letter. Those include an obsessive focus on customers; acceptance of failure as a non-optional element of innovation; people at every level asking “how do we make this better?” every day; a “decentralized distribution of invention throughout the company” (which Bezos says is “the only way to get robust, high-throughput innovation”); kaizen teams that involve nearly 5,000 associates; and an internal experimentation platform called Weblab.

Amazon’s innovation efforts sync with the company’s overall vision: “to be Earth’s most customer-centric company for four primary customer sets: consumers, sellers, enterprises, and content creators.” That’s a broad and challenging mission, one that has yielded an ever-expanding array of offerings, but it is also specific enough to focus associates on a “True North” for value. Customer obsession has been Amazon’s driving force since it was founded. 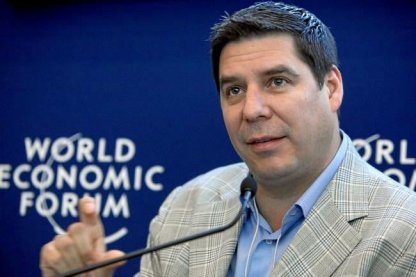 Marcelo Claure, founder of Miami-based cell-phone distributor Brightstar and now CEO of Sprint, says that to find opportunities for disruptive breakthroughs, look for areas where the rules of engagement have not yet been written. Anywhere customers have to deal with a complex process in order to get a job done is a leverage point.

In the 1990s, Claure found his big opportunity in Latin America, where the process of obtaining a cell phone was laden with red tape all along the supply chain. As Claure puts it, that’s when the light bulb went on that “companies that are easy to do business with will always win.” He says, “Simplicity is the key attribute of winning businesses.”³ There are still blue oceans like the one Claure discovered, but finding and charting them will mean exploring markets in which it is more difficult to do business. That requires a willingness to take on higher risk. Not every organization is suited to pursue large-scale innovation on that disruptive platform, but the same principles can be used to look for innovation on other platforms.

Regardless of how you aim to balance innovation work among the platforms, you will need to articulate your business model in some detail. That’s true even if everyone on the management team thinks the business model should be obvious. You would be surprised at the differences that surface when top managers actually get together to map a common view of the business model within which they work and plan every day. Managers also need to develop the skills to evaluate the business model regularly, as well as the ability to map new models for the core business as it evolves and for new initiatives.

For any organization, large or small, top leaders must work to strike the right balance when allocating resources among new growth initiatives and the core business. But they must also figure out how they will actively work, individually and as a team, to foster innovation at all levels of the organization. To set high-level numeric targets for growth absent a strategy and infrastructure for innovation, and simply expect other levels of the organization to come up with breakthrough initiatives to meet those growth targets, is unrealistic. In other words, a leader who expects to “set it and forget it” until the next quarterly meeting is doomed to fail.

A culture of innovation must start with top leaders and cascade through the rest of the organization. As an entreprenuer-founder, Claure found that he could influence the organization easily and quickly. “When it’s your own company, you influence change from you all the way down to any layer you want. Everybody knows you, and everybody has seen your growth,” Claure says.3 The situation is different as CEO of a large organization. “You have to influence change through your management team, and your management team influences change through the third layer, and the third layer influences change to the fourth layer,” Claure says.³ It’s important to recognize that although you may need to use different approaches, the influence on innovation starts at the top in every situation.

Always innovating, Amazon has a new twist in its plan to enter the grocery market with a new hardware product just introduced: Amazon Dash, a combination barcode scanner and voice recorder that syncs up to the shopping cart on Amazon Fresh.

A culture of innovation

“For a company at Amazon’s scale to continue to invent and change, to build new things, it needs to have a culture that supports a willingness to experiment, a willingness to fail.”² – Jeff Bezos, Amazon CEO

Speed is often critical to innovation, but it’s hard for large, complex organizations to be nimble and quick. To counter a tendency toward slowness, leaders need to set a faster cadence by being biased toward experimental action, and willing to accept failure (within a quantified range of risk) as a necessary consequence of that experimentation.

Claure really pushes his staff, when a new offering will bring an obvious benefit to consumers, even if it’s not perfect at the beginning. He says a solution “doesn’t need to be analyzed by 100 people 50 times over. You can launch things being 70 percent right. They don’t need to be 100 percent right.”³

If you truly want to cultivate an entrepreneurial spirit in your organization, you need, as Bezos puts it in his 2014 letter to shareholders, “A pioneering culture, one that actually enjoys and is excited by experimentation, a culture that rewards experimentation even as it embraces the fact that it is going to lead to failure.”

According to the GE Global Innovation Barometer, the pressure for innovation remains high globally. More than 90% of the 3,000+ executives surveyed cited innovation as their top priority.

Although middle market companies – those with revenues between $10 million and $1 billion – make up only about 3% of American businesses, this segment is a huge economic force, accounting for roughly a third of the U.S. GDP and more than 43 million jobs. That's according to the National Center for the Middle Market.*