An Article From the Archives:

Reduced downtime. Greater capacity. Increased yield. Higher revenues. According to Darrell Birks, maintenance supervisor at MEMC Electronic Materials (St. Peter’s, MO), you can get all this quickly, simply and with minimal expense. All you need are creative ideas from your shop-floor people and an ample supply of “sticky notes.” In this month’s article taken from the Productivity TPM Newsletter, January 1992, we learn how one organization used CEDAC to manage improvements within their organization. 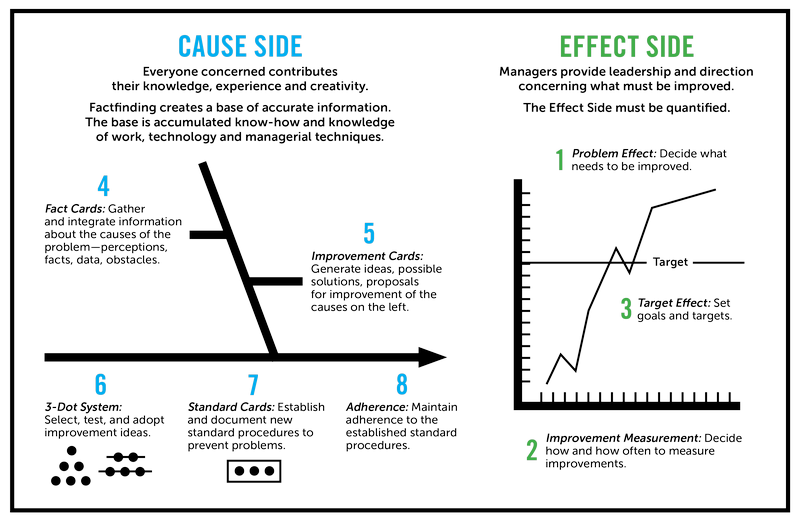 The eight stages of continuous improvement as reflected in the CEDAC® diagram.

The technique is called CEDAC,® or Cause-and-Effect Diagram with the Addition of Cards. Birks says it’s a great way to solicit, organize and implement improvement ideas in maintenance–or any other department. The diagram above shows a schematic of the eight-step CEDAC process.

As QIM teams brainstorm, they often suggest applying CEDAC to a specific problem. “They first establish where they are and where they want to go,” says Birks. “The CEDAC goal [i.e., the “target effect” in the above diagram] is reached by team consensus; it’s not dictated,” he emphasizes.

Birks and MEMC first learned about CEDAC in 1986 from Japanese management expert Dr. Ryuji Fukuda. Maintenance took the lead in CEDAC implementation, and its success has incited all other MEMC departments to adopt the method.

The bottom-line benefits in 1986 alone were startling. Birks reports that CEDAC contributed much to the 0.6% yield increase that year. That may seem like peanuts, but in the silicon wafering business, a 1% improvement in yield equals tens of thousands of dollars per month in increased revenue.

Why focus on the mount line? With the plant at capacity and customers demanding more product, QIM teams analyzed the entire wafering process and identified the mount line as a primary bottleneck.

At the time, maintenance considered the 3% mount line unplanned downtime “acceptable,” says Birks. But the mount-line CEDAC core group estimated that a downtime reduction to 1% would “enable us to load 1,000 more blocks (each of which holds four to eight wafers) per month,” Birks says. “That’s lots of extra capacity and revenue.”

The core group broke the mount-line process into three sub-processes and made a CEDAC board for each. More importantly, they decided on the number of equipment stoppages as the improvement measurement.

“We usually track down-for-maintenance (DFM) percentages,” says Birks. “But operators told us that most of the mount-line stoppages were short, so we focused initially on the total number of stoppages. We figured we could do another CEDAC later with time as the measure if we had to.”

The core group set the goal of two stops per shift. They graphed the current level of stoppages on the CEDAC board and posted it next to the information center, visible to all operators and maintenance people in the mount-line area. The ideas came in abundance.

“There wasn’t a single idea that we didn’t implement,” recalls Birks. “Most were quick and inexpensive.” Some results:

Discover how Herman Miller employed elements of Business Model Innovation to successfully develop and introduce a new product to a market they hadn’t previously served.

The questions companies bring to us today generally converge on one primary theme—culture change.